Just What Is A Character To Do?

Robert P. Bennett, author of the Blind Traveler mysteries, is my guest. His blind protagonist, Douglas Abledan, navigates the world through a talking GPS, but it doesn't stop him from stumbling over bodies. Fascinating books!
Who are the people writers write about? Why are they chosen as subjects? These questions are valid for both nonfiction and fiction writers. We art taught from an early age that we must find the good things in each person we meet. The same lesson holds true for writers as well as it does for children. Each of us has to find something good, something interesting, in the people we write about. In my writing career I’ve chosen to focus on a specific group of people, those with disabilities. I’ve looked at what they do and how they do it. Over the years I’ve found many points of interest for my readers: technology, politics and, of course, the characteristics of the individual people themselves. Among the areas I’ve found to be the most interesting are the hobbies that they have chosen to pursue. Some played sports. Others played instruments.  Still others choose to study a particular subject. In other words, people with disabilities choose hobbies that are no different than their able-bodied counterparts. In some cases they may have to pursue those interests in slightly different ways, but they are all the same.
In creating a protagonist for my fiction I have leaned heavily on the things I learned about people when I was writing magazine articles.   I once wrote an article about a piece of technology that allowed a blind man to navigate through his world using a combination of GPS and virtual reality. I took that technology and built a fictional character around it. Thus was born Douglas Abledan and the Blind Traveler Mysteries. As I write more about his adventures, I realize that has to become more and more “real.” He has to become three-dimensional. So, not only do I have to create his world, not only do I have to give him a physical appearance, but I also have to furnish him with a job and hobbies.
From the beginning I gave a love of music, specifically Jazz. While a sighted person might learn to read music from a sheet, learned to distinguish the different notes that make up the songs he likes simply by listening to them repeatedly. He plays them on a harmonica, admittedly not very well. I also imbued him with a sense of what the world looks like, its natural as well as man-made structures. With this quality he has developed an interest in architecture. Using his hands as a sighted person would use his eyes; is able to distinguish, with a fair degree of accuracy, what a structure looks like. Through study, he has learned the difference between the Art-and-Crafts style of architecture that flourished in the late 1860s and the structures that borrow design elements from of the Greco-Roman period. And, with his nimble fingers, he can feel the differences.
As writers we must give our material as well-rounded an appearance as possible. Whether we write fiction or non-fiction the goal should be the same. Flesh out the people you write about. Show your readers who they are. And remember, it is just as important for a fictional character to have hobbies and interests as it is for those in the “real” world. Not only will these make your characters more interesting. They will also present your readers with another avenue to connect with and care about those characters. 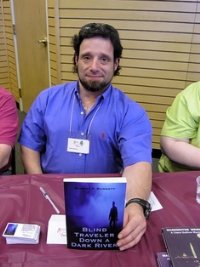 About Robert Bennett
Robert Bennett is a social worker and writer who focuses on issues of disability. His articles, which appear in both local and national publications, have spanned a wide range of topics. He has spoken to groups of physical therapy students, church members and senior citizens, and has appeared on several radio programs. In writing about the issues people with disabilities are involved with he feels he has learned a very important lesson, "It is the act of truly living and believing in yourself that is important, not the manner in which that action is undertaken." Contact Mr. Bennett through his website at
Website:  http://www.enablingwords.com
Blog:  http://abledan.wordpress.com/
Posted by Ellis Vidler at 9:50 PM

Very interesting, Robert. Your books sound intriguing, maybe because I've written two books under two different names that focus on blind protagonists. And yes, I gave the woman a hobby. She runs with a guide. You wrote what you know; I wrote what I most fear. I became familiar with blind runners when my son ran track, and when I was writing my book, I contacted the track coach to get more information about blind running. Later, he invited me to the Deaf and Blind School near my house to sit in when blind computer specialists gave a demonstration at the school. By the time I left, I felt totally incompetent. They were amazing.

A few years ago, I saw a program about blind youngsters who could tell where everything was in a room or outside by clapping. It was one of the most exceptional things I'd ever seen and I still remember it.

I applaud your work, both in your chosen profession and in your writing. Best to you. Thanks, Ellis, for another terrific guest.

Robert, I'm so glad you're here today. The reviews for your books are excellent, and Douglas Abledan is a fascinating protagonist. I'm really looking forward to reading his adventures.

Thank you both for your comments. I hope you read and enjoy my stories.

@Polly, I would very much like to chat with you about your experiences as a writer and as a mother. Please get in touch with me at Rbennett@enablingwords.com

Very interesting approach to characters who might not be as readily recognizable to readers, but invite empathy and identification. Thanks for the post.

How interesting! In my YA novel
STACY'S SONG, the hero is a blind musician as well.

I love this approach with a character. Are they on "tape" for what could be a whole new audience for you?