POV and Dialogue with Billy and Redge

Here's something I was thinking about that's often a problem--scenes with no clear point of view or image of what's happening.
Consider the following conversations between Billy and Redge. Which is easier to picture or gives you a visual image of the two brothers and what they’re feeling?
“I got to tell you something, Billy,” said Redge.
“What?”
“I killed Mooney,” he said with a nod.
“You did?” Billy asked with a look of awe. (This implies it's Redge's POV)
“Yep,” Redge said. 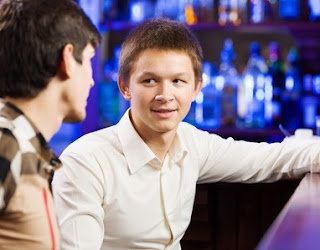 Well, you know who’s speaking, but what are they feeling? What’s the mood of the scene? Liven it up and give a visual image by adding some beats, or actions.
Redge searched the bar for any listeners. He spat a plug of tobacco, then lowered his voice and pulled his brother close. “I got to tell you something, Billy.” (Redge’s POV and sets the scene in a location)
“What?” Billy, catching a whiff of Redge’s breath, jerked away. (Shift to Billy’s POV) OR
“What?” Billy wrinkled his nose and blinked, turning his head away. (Still in Redge’s POV because this is what Redge sees)
“I killed Mooney.” He puffed up his chest and stood straighter. (Shows that he’s proud of what he did)
“You did?” Billy’s eyes bulged.


“Yep.” Grinning, Redge rocked on his heels and pulled a gun from his pocket.
Posted by Ellis Vidler at 8:10 AM No comments: