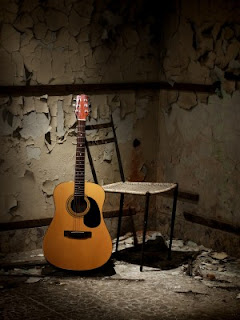 Reposting these great little stories from years ago. I loved these First Friday gems.

Hooray! It's First Friday again, and three great authors have described, in 150 words or less, what they saw in this picture. Each one had an entirely different idea. This is how creativity works. Wonderful examples.

HALLINAN
For thirty years, Andres played his guitar in the corner of the little Barcelona bar as the clientele changed from working-class people to thugs and gangsters from the wharves, to slumming aristocrats, and finally to gay men and women. But Andres played on: seguedillas, flamenco, classical.  On the night Andres didn't show up for work, the bartender went to his one-room apartment and found it empty, except for his guitar.  No effects of any kind.  The bartender brought the guitar back and leaned it against Andres' chair.  In the 1990s the bar was closed and shuttered for the last time.  A year ago, the building was scheduled for demolition, and the workmen found a room rotten with damp, the walls cracked and peeling, everything shrouded in plaster dust.  But the guitar leaning against the chair in the back corner: it looked like someone had dusted it every night for years.
LANE
“Thank you . . . thank you.” He nodded to the enthusiastic crowd that overflowed the smoky basement club. Breathing in the sweet smell of weed, he flashed his best boyish grin at the table nearest the stage. Three sexy chicks, all giving him the eye.  He’d go home with at least one of them – shit, maybe all three.  If a good looking guitar player couldn’t get laid…
He shifted his butt on the stingy-seated folding chair and struck a tentative chord…
His wife’s voice shrilled down the stairs. “Damn it, Mort, can’t you shut the basement door?  You couldn’t play guitar fifty years ago; you can’t play it now, you old fool.”
The door slammed; the nightclub disappeared. Alone in the dank, mildewed basement, Morton sighed and watched another leaf of paint peel loose and drift, like a discarded dream, to join the others littering the floor.
MONAJEM
Rafaela DaVinci bared her fangs. “You put my guitar in the dungeon?”
“Strictly speaking, it’s a cellar,” I said mildly. Damp, with peeling paint and fractured linoleum, sure—but it was also the closest time portal. “I propped it against a chair.”
She snarled, all flying hair and furious eyes.  “That guitar cost ten thousand bucks!”
“So it’s the perfect bait,” I said. “Titus can smell an antique from eons away, and if he opens the portal to take it…”
“I can get back to the future.” Where she wouldn’t have to hide her fangs.  “Where I’ll have to buy back my own damned guitar!”
“That’s where my brilliance comes in,” I said. “I’ve rigged the pickup inside the guitar. Any noise in there and we’ll hear it. You’ll have ten seconds  to cross the portal, snatch the guitar—
The portal opened, squawking a warning through the pickup. Rafaela ran.

Edgar, Shamus, Macavity and Lefty nominee Timothy Hallinan has written twenty-one published novels, all thrillers and mysteries, all critically praised. He currently writes two series, one set in Los Angeles and the other in Bangkok, and in 2017 he also revived his earlier series, written in the 1990s about the overeducated slacker private eye Simeon Grist.

Street Music
Eight years ago, Poke Rafferty, an American travel writer, and his Thai wife, Rose, adopted a Bangkok street child named Miaow, forming an unconventional intercultural family. That family has weathered extreme challenges—each of its three members carried the scars of a painful and dangerous history—but has stuck together with tenacity and love (and a little help from some friends).
http://www.timothyhallinan.com/ His blog is in his website.

is the author of the critically acclaimed Elizabeth Goodweather Appalachian Mysteries from Bantam Dell -- Signs in the Blood, Art's Blood, Old Wounds, Anthony- nominated In a Dark Season, and the recent Under the Skin, as well as The Day of Small Things, a standalone.  Vicki draws her inspiration from the past and present of rural  where she and her family have tended a mountainside farm since 1975. Learn more about Vicki and her books at http://vickilanemysteries.com/ .  There is also a daily blog with lots of pictures
... http://vickilanemysteries.blogspot.com/ . . .


And the Crows Took Their Eyes
During the Civil War, in bitterly divided western North Carolina, Confederate troops execute thirteen men and boys from a rural community opposed to secession. A microcosm of the deep horrors of civil war, the Shelton Laurel Massacre as it came to be known, pitted neighbor against neighbor, touching every family with violence at their own front door. Told by those who lived it; Confederate and Unionist alike--Keith, who ordered the execution, Polly, whose children's death precipitated the massacre, Judy and Marthy, who bore torture to protect their men, and Sim, conscripted by the Confederates and haunted by his part in the Massacre—the novel offers an intimate glimpse into the lives of five people tangled in history's web, caught up together in love and hate. And all five will bear the mark of the massacre long after the event, struggling to come to terms with the bleak consequences of civil war.Based on an actual event and historical characters, And the Crows Took Their Eyes is a richly imagined portrait of a dark and bitter time—illuminated by gleams of humanity at its best.

Lady Rosamund and the Poison Pen
Lady Rosamund Phipps, daughter of an earl, has a secret. Well, more than one. Such as the fact that she’s so uninterested in sex that she married a man who promised to leave her alone and stick to his mistress. And a secret only her family knows—the mortifying compulsion to check things over and over. Society condemns people like her to asylums. But when she discovers the dead body of a footman on the stairs, everything she’s tried to hide for years may be spilled out in broad daylight. First the anonymous caricaturist, Corvus, implicates Lady Rosamund in a series of scandalous prints. Worse, though, are the poison pen letters that indicate someone knows the shameful secret of her compulsions. She cannot do detective work on her own without seeming odder than she already is, but she has no choice if she is to unmask both Corvus and the poison pen. Will Corvus prove to be an ally or an enemy? With the anonymous poison pen still out there, her sanity—and her life—are at stake.

Stop and say hi to these super authors. Tell us what you think or join in. We'd love to hear from you.
Posted by Ellis Vidler at 8:10 AM 3 comments: