Writing with a Partner

Have you ever considered writing with a friend? Or even someone you respect but don’t know well? It can be a challenge. I did, and it turned out to be a great experience, but it doesn’t always have a happy ending. We’re all egotists in some way and used to having total control over our writing. It’s normally a solitary endeavor, and sharing responsibilities and control is a new concept. You have to be willing to set aside your ego, at least most of the time. This is my experience.


First, decide why you want to partner with the other person. Do you have complimentary skills and knowledge? Is one of you plot-oriented but not as strong on character development? Assess your abilities and see if they mesh. If you have the same areas of strength, you’re more likely to clash. You really must respect each other’s ideas and sensibilities. My partner for The Peeper, Jim Christopher (Chris), is a forty-year law enforcement veteran and a terrific storyteller (He has other stories that will make your hair stand up!) and I'm a published author and editor. He had the basic concept and asked if I’d be interested. Yes! I definitely was.
Chris is a big man with a big personality. He makes a lasting impression on everyone he meets. I’m quieter, more dig-in-and-hang-on than commander in chief. Our differences kept life interesting for many months.
Set ground rules. Be constructive. We decided I was stronger at relationships and he at plotting, but both of us could make valuable contributions to any part of the story. This worked well until he wanted to kill someone I cared about. After my outraged protest, I think he pushed it just to stir the pot. Humor is important.
We read Jennifer Crusie and Bob Mayer’s posts on collaboration and decided that, on the main characters, Chris would have final say on the males and I would have it on the females. But we wrote whole scenes individually, including all the characters in the scene. Then we exchanged them by email and made minor changes to each other’s work. If we felt significant changes were needed, we discussed them in person. We also met for plotting sessions. Sometimes we disagreed and hashed it out over several days, arguing our reasons and objections. But in spite of our very different personalities, we didn’t get angry. I believe this is because we respected each other and were both willing to compromise. Most of the time.
Chris has a peculiar ability to foresee scenes in number of words. He’d say, “We need a fight with this and this. It should run about 3,500 words. Then this should happen. It’ll take about 5,000 words.” That’s totally foreign to me. I just write until it’s done. But he turned out to be amazingly close. 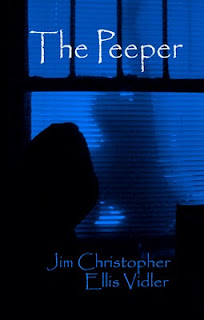 Of course he had the final say on the police procedures. Even though I wrote some of those scenes, he made sure they were correct. I learned a lot. And he wrote some of the more personal Kay and Sam scenes. I’ll bet some of his cop friends would be surprised. I was.

Elliott, the hero of the story, was Chris’s brain child. He set the tone and voice initially, but his idea was so clear I was able to follow it. Much of the humor came out of Chris’s head. I loved it.

So if you find the right person, it can be a great experience. If you don’t, admit it isn’t working, dissolve the partnership quickly, and stay friends.

Have you tried this? Did it work for you? What went wrong and what went right? Any suggestions? We’d like to know.

Calling Down Your Muse

My muse is nothing if not unpredictable. She strikes without warning at the most inconvenient times, such as when I’m driving and have no way to write, but she rarely appears when I sit down at my computer. I’ve spent enough hours staring at a blank screen to have written the Lord of the Rings. (That’s when the siren call of Spider Solitaire lures me in.)
I once advised students to type a sentence, any sentence, and then begin editing it to call up their muse. You know, Mary had a little lamb. . . . Then you begin making changes. How about a more modern name, one with a little sass? Jinx. Okay, that could work. Next, why a lamb? Is that the image for your heroine? Let’s give her a Mustang—a 5 litre V8 that pumps out a smoking 412, to be exact (thank you, Ford). And surely you can come up with a stronger verb than “had.” Are you getting the idea?

You can do this with a sentence you’ve written too. Here’s one of mine, obviously written on the muse’s day off: Creeping forward, the two boys shined the flashlight into their secret cave, a narrow cavity behind the crumbling brick wall of the apartment house basement, checking for rats or signs of discovery.