Rules or No Rules? 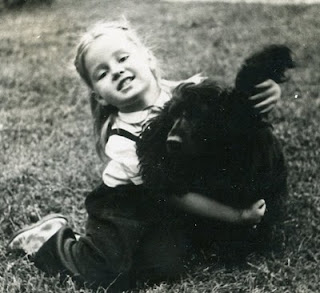 A few truths pop up in most commercial fiction. Does that make it formulaic? I don’t think so. People read fiction for entertainment or escape. Happily-ever-afters make me happy. Life has enough tragedies—I don’t need any more. Crime fiction does have some bad scenes and a few murders; but the main characters usually win in the end, and the bad guys get what they deserve, so it’s satisfying.
What about the “rules”? Don’t kill children or dogs, at least not if they’re major characters, and definitely not “on-screen.” That’s an understandable guideline, one that suits me. A child murder in backstory is usually acceptable though, something that happened before the main story begins and is only referred to, not seen.
Rules are only guidelines, and they shouldn’t stifle creativity. Sometimes they even make you stretch to come up with an interesting twist on an old theme.
Rules can always be broken, and it’s easy to come up with successful examples, but seriously breaking them makes the book a harder sell, particularly if you’re not an established writer. The rules are there for a reason—they’re proven to make books more interesting and help them sell. But it’s still tough sometimes.
What do you think? Do you find them constraining? Do you ignore them or try to work with them?
Posted by Ellis Vidler at 9:56 AM 3 comments:

Clowns—no, it’s not about politics 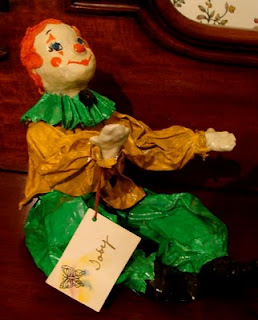 It’s about the papier-mâché clowns I used to make. Most of them became lamps, and they all found homes. Papier-mâché means chewed paper, but I wasn’t that authentic. They were entirely handmade though. I made coat-hanger frames, tore newspaper into small pieces, and soaked it in a mixture of flour, water, and Elmer’s glue. Each clown took close to 40 hours to make , counting the drying time. The clothes were paper too. The oven was always on and steaming. Definitely a winter event. But it was fun. It did destroy the kitchen while I was doing it though. I can’t even write on a computer and be neat. My kitchen table was under this mess for weeks at a time. 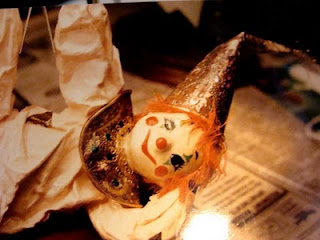 The clowns were unique and most represented something or were doing something, such as napping. One was a boxer, one a cowboy, a baseball player, but all had clown faces and feet.
Later I tried using dolls for the base to save time, but they weren’t as interesting.
All this was many years ago, when our son was in middle school. One day he asked if I could pretend 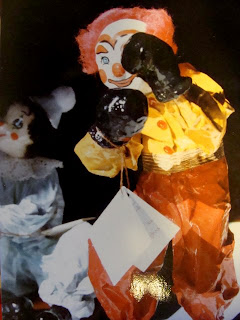 to be normal for a while and bake cookies or something that smelled good instead of paper. Since then we’ve come to appreciate that neither of us will ever be “normal.” He’s a musician, so he can’t say much.

From now until Thanksgiving, I doubt if I’ll get any writing done. Maybe I’ll post about cooking—it’s better than cleaning.  I’d like to paint a couple of rooms, but I doubt I’ll have time. I don’t want just plain color, I want faux finishes. Nothing’s ever simple.
What do you do? Do you cultivate messy, impractical activities?
Posted by Ellis Vidler at 9:57 AM 4 comments: