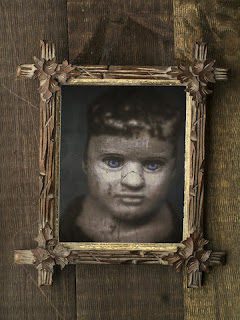 Please join in and add your take on the photos (150 words) in the comments.

A construction crew unearthed the forgotten kudzu-covered shack while clearing

land for a new development. Roots and rot destroyed everything inside except for six photos of little girls, lovingly framed and tacked to the plank wall.

Detective Janet Forman recognized only one of the faces. Eight-year-old Violet Hamm had gone missing over sixty years ago. Other girls had disappeared then, too, but Violet was a local girl, and her fate had become the warning of every mother in town: “Be careful, or you’ll get snatched like Violet Hamm, never to be seen again.” Janet had heard it from her mother.

“Is there a basement?” she asked one of the officers.

“Yeah, but it’s full of mud and critters, and the stairs are rickety.”

Halfway down the flight, she detected the tiny mounds on the basement floor.

Pacing, his body remembered her shiny, blond hair, crystal blue eyes, and smooth, silky skin that glowed like only a thirteen-year old girl’s could. He couldn’t wait to touch her, to feel her, to taste her. His hands stroked down his chest to his belly.

He smiled thinking about his first, Abigail.  Her screams. That first month, she screamed a lot. He should have probably let her go after two. A mistake he wouldn’t make with Grace.

The bathroom door opened revealing her in silhouette. She looked shorter and wider. Stepping into the light made it worse. Her blonde hair had turned curly and dirty. Her nose was wide and broken the way porcelain breaks. She looked like a forgotten picture from the last century.

This couldn’t be the same girl. This girl made him want to scream. “Grace?”

That first month, he screamed a lot.

“Leave it alone,” Mom quietly reminded me every time we visited the cabin.

Now the run-down cabin was mine, and it was time to rid the place of that ugly picture.

I gripped the edges of the antique frame and pulled. Nothing, except a muscle quiver in my arms.

Grabbing my crowbar, I pried upward beneath the frame. An instant later a shimmery wave flowed through the cabin. The walls buckled, then held. Well, Quantico was nearby, perhaps they were testing something new.

Not to be defeated, I grabbed my cordless saw and cut the rough wood wall around the frame, cheering as it fell to the ground and the glass shattered. Obscuring those haunting eyes and broken nose.

The wave hit again, knocking me to the ground. Moments later, a child stood in front of me, her blue eyes glowing, her nose broken.

She smiled. “Your turn.”

I watched through shattered glass as she walked out the door.

Polly Iyer is the Amazon bestselling author of nine books of suspense and mystery, one novella, and four sexy romances she writes under the pseudonym Maryn Sinclair. She started out as a fashion illustrator and storyboard artist, importer, and store owner before embarking on her fourth, and last career as an author. Her novels include four books in the Diana Racine Psychic Suspense series, Mind Games, Goddess of the Moon, Backlash, and The Scent of Murder; five standalone novels, Hooked, InSight, Murder Déjà Vu, Threads, Kindle Scout winner Indiscretion, and one novella, The Last Heist, from the anthology Lowcountry Crime. One reviewer described her stories as "...making heroes out of damaged people."

The Scent of Murder

In the first case, Diana and Lucier search for the missing mother of a street boy they've taken under their wing. In the process of finding her, they expose the secret underbelly of crime and corruption among some of the city's most upstanding citizens, while putting Diana's and the boy's life in jeopardy at the same time.

An eccentric socialite pressures Diana to rid her mansion of her twin sister's ghost in the second case. With no clues to go on, Diana and Lucier must first prove the missing sister is dead.

The longer I live the more important I find laughter, although you couldn’t tell it from this story.

I’ve written three books—a cozy, a romance, and a young adult. I prefer to think of myself as versatile instead of wishy-washy. Right now, these books only live on my hard drive. If you want to read one, let me know, but please, please don’t take my hard drive.

I ended up in the foothills with two horses, a mule, three dogs and some pretty fish.

In my spare time, I teach tai chi, write, ride and work wood.

For more pictures of my guys, blogs, and a few videos, check me out at www.howardglewis.com

I started writing as a child, really. A few things happened on the way to becoming a published author … specifically, a junior high school teacher who told me I couldn’t write because I didn’t want to study … urk … grammar…

That English teacher stopped my writing for years.  But the muse couldn’t be denied, and eventually I wrote, a lot, some of it award winning. However, I wasn’t really making a career from any of this.

My husband told me repeatedly that independent publishing was becoming a valid way to publish a novel. I didn’t believe him even after he showed me several Wall Street Journal articles. I thought indie meant vanity press.

I couldn’t have been more wrong.

I started pursuing this direction seriously, hit the keyboard, learned a litany of new things and published my first novel. My second book became a bestseller, and I’m absolutely on the right course in my life.

Please come visit me at www.lasartor.com, see my books, find my social media links, and sign up for my mailing list. I have a gift I’ve specifically created for my new email subscribers. And remember, you can email me at Leslie@LeslieSartor.com

A treasure hunter disappears in the Yucatan jungle. Her twin sister, a reclusive jeweler with none of the skills necessary to do so must rescue her. Then comes along her sister’s untrustworthy, but experienced ex-partner!