The inspiration for the J.R. Finn Sailing  Series 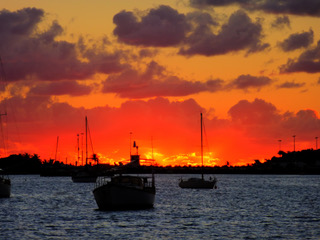 I was alone, tying my dinghy to a marina dock in Rodney Bay, St. Lucia. Looking down at the cleat as I secured the bow line, I was surprised when two bare feet came into view.

"Coming or going?" a girl asked.

Glancing up at her, I saw that she was deeply tanned, with shoulder-length hair bleached by sun and saltwater. She wore cutoffs and a plain, white T-shirt. A worn backpack hung from one shoulder. Smiling, she looked me in the eye. She was an appealing young woman in her early twenties — about my daughter's age.

Holding my gaze, she grinned. "Are you just arriving, or are you about to leave St. Lucia?"

"I'm looking for a ride. Are you by yourself?"

"Got a lady aboard?" she asked. 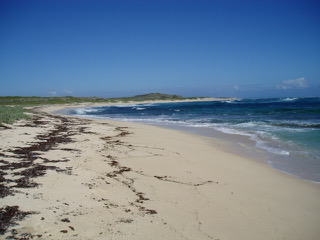 I shook my head. "We aren't planning to leave any time soon. Sorry."

"No problem, but if you hear of anybody looking for crew, they can find me in the bar."

"Where are you headed?"

I nodded, and she turned away, heading for the bar in the marina.

That was twenty-plus years ago, but the memory is vivid. She was living dangerously. Did I look harmless to her, or was she so desperate to leave that she didn't care?

I've often wondered what became of her. Every time I hear about a woman going missing, she comes to mind.

Early in 2018, I decided to write a third series of sailing thrillers. My first two series, the Bluewater Thrillers and the Connie Barrera Thrillers, were well established. The Connie Barrera books are a spin-off from the Bluewater series, so I was looking for something different. I needed a new challenge. I settled on a male protagonist, as both of my established series featured women in the lead roles. 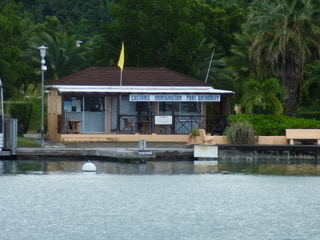 My protagonist is a retired government assassin named Finn. He lives on a beat-up old sailboat in the islands. Maybe Finn's not really retired. He does a little contract work for his old employer sometimes.

Needing an opening scene for Finn's first adventure, I drew on memories of my years sailing the Caribbean. That young woman I met in St. Lucia had promise. What if she wasn't as clean-cut as she appeared? She might have been looking for trouble. What if she approached Finn instead of me?

And that's how Assassins and Liars began. The young woman found Finn tying up his dinghy in Puerto Real, Puerto Rico. She introduced herself as Mary O'Brien and told him she was looking for a ride.

And so the J.R. Finn Sailing Mystery Series began. Eight books later, Finn's still trying to understand what Mary's game is, but he's enjoying her company. She seems to be fond of him, too, but there's still plenty of trouble ahead for both of them. I'm working on the ninth book in the series, and I'm enjoying their company more with every chapter.

For more information on the Finn books, go to https://www.amazon.com/gp/product/B07PDJ5LQJ.

Sharks and Prey is the eighth and latest book in the J.R. Finn sailing mystery series. The series begins in Puerto Rico with Assassins and Liars, when Finn meets Mary O'Brien.

"People just call me Finn," he says, by way of introduction.

Finn is retired after a 20-odd-year career as an assassin with an unnamed government agency, but he still handles a contract job for them once in a while.

He's about to leave on a mission when Mary appears out of nowhere and asks to hitch a ride on his sailboat. She doesn't care where he's going; she just wants to leave Puerto Rico in a hurry.

Finn agrees to take her along, thinking she'll provide cover for his clandestine mission. The trouble begins before they even leave port. Mary isn't at all what she appears to be, but somehow, she and Finn become a couple over the course of several books.

In Sharks and Prey, Finn’s daughter, Abby, disappears from a beach resort in Antigua while on a semester break. Finn and Mary have just arrived in Antigua aboard their boat, Island Girl, to relax between missions. They learn that Abby’s missing when they see a poster in the Customs and Immigration office. 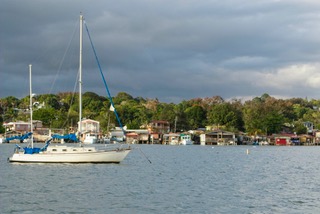 Finn has never met Abby; her mother divorced him while he was on a clandestine mission over 20 years earlier. He hasn’t spoken to his ex-wife since he left on that mission, but he’s followed his daughter’s life from afar. Distressed, Finn calls his ex-wife and offers his help.

Join Finn and Mary in Antigua as they wreak havoc while looking for Abby and her roommate.

Another page-turner in the J. R. Finn series, Sharks and Prey is perfect for fans of mystery / thrillers set in the Caribbean.

Charles Dougherty has written over 35 mystery/thrillers in three series set in Caribbean sailing world, plus two non-fiction books about life as a full-time cruising sailor, and a few other stand-alone novels.

Dougherty is a lifelong sailor; he's lived what he writes. He and his wife spent over 30 years sailing together. For 15 years, they lived aboard their boat full-time, cruising the East Coast and the Caribbean islands. They spent most of that time exploring the Eastern Caribbean. Dougherty is well acquainted with the islands and their people. The characters and locations in his novels reflect his experience. 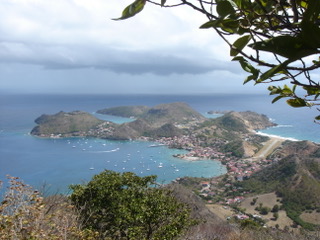 A storyteller before all else, Dougherty lets his characters speak for themselves. Pick up one of his sailing thrillers and listen to the sound of adventure as you smell the salt air. Enjoy the views of distant horizons and

meet some people you won't forget.

These days, Dougherty and his wife are living in Texas to be close to their two children and eight grandchildren. As he says, "The sea and the islands will always be there, but little ones grow up quickly."

Find out more about his books at http://www.clrdougherty.com/p/home.html

Thanks for sharing. You have an interesting background, and living on the sailboat gives your stories real authenticity. I enjoyed the Bluewater Thrillers and am looking forward to the J.R. Finn series.