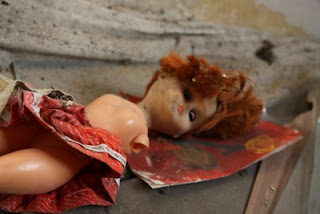 Three talented authors give their take on same photograph in 150 words. It's always interesting, the different ideas and voices that a single picture generates.
JAMES
The armless redheaded doll gave me the creeps when I first dug it up. I was clearing away brush after the violent windstorm from three days ago when I spotted a small foot sticking out of the ground beneath the elderly privet. I had no idea how long the doll had been interred. We’d lived in the house only five months, and I knew nothing about the previous owners.
Soon after we moved in my two-year-old son started talking about a red-headed girl doll he wanted to play with. The little girl had it, and he wanted it.
There was no little girl in our house or anywhere on the block. Yet the baby kept getting increasingly frustrated because the little girl held the doll and wouldn’t let go.
He jabbered excitedly and held out his hands when he saw what I’d unearthed.

LAVENE
They’d looked everywhere for Rita.
The storm had torn the Outer Banks apart. Most people thought Susie’s mother was crazy trying to find a doll when their home had been washed out to sea. They didn’t understand. Susie needed something to think about, something to hope for. She needed to think there was something still left for her so she could pick up the pieces of her life.
Susie’s Mom needed that too.
Susie and her mother found Rita, finally, lying on a bench near the boardwalk, as though she’d been waiting there all that time for them. They cried together, and Susie wrapped her scarf around Rita where the rough weather had stripped her dress away. She smoothed her hand across the doll’s hair and tried to make her presentable.
“I think she’ll be fine now,” Susie said with a smile.
“I think we’ll all be fine now.”


Silently slipping into the magical dress shop,
cloaked in the black velvet mystery of night,
her heart tripping like a hammer,
she escapes into a world of wonder.
A  land of make-believe comes alive
as she sees the exquisite dresses,
fingers the delicate fabrics,
and pretends she is the fey fairy princess of her dreams.

She slips into a confection of silk and buttery lace.
The purity of a violin's sotto sound begins
as she dances, swirls, twirls in her pretty party dress.
And there is nothing but the perfection of this moment,
serene and beautiful for all eternity.

A loud rapping, tapping startles her.
"There you are," her mistress says.
"It is late and time we were in bed."
She fervently believes
some day her dream will become reality,
but for now,
she is merely a broken doll
clothed in torn rags.

DEAN JAMES
Dean (AKA Miranda) James is a seventh-generation Mississippian who has now spent over half his life in Texas. A medical librarian by day (in the Texas Medical Center in Houston), he plots murders, listens to music, reads, and works part-time at Murder by the Book on Saturdays. He is owned by two cats who make Sarah Bernhardt look like an amateur when they think it’s feeding time. 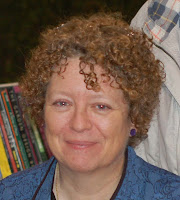 JOYCE LAVENE
Joyce Lavene writes bestselling mystery with her husband/partner Jim. They have written and published more than 60 novels for Harlequin, Berkley and Charter Books along with hundreds of non-fiction articles for national and regional publications. She lives in rural North Carolina with her family, her cat, Quincy, and her rescue dog, Rudi. Visit her at www.joyceandjimlavene.com, www.facebook.com/JoyceandJimLavene . Twitter: @authorjlavene, http://romanceofmystery.blogspot.com.

JACQUELINE SEEWALD
Multiple award-winning author Jacqueline Seewald has taught creative, expository and technical writing at the university level as well as high school English. She also worked as an academic librarian and educational media specialist. Her Kim Reynolds mystery novels, originally published in hardcover by Five Star/Gale includes: The Inferno Collection, The Drowning Pool, and The Truth Sleuth. The first two novels in this series are now available as ebooks in all formats including Kindle, Nook, Kobo, etc. Check out the The Truth Sleuth available as of January 2013 in paperback edition from Harlequin Worldwide Mystery.

I love First Friday's here. And this set continues with the high standards of those before.

Each take on the red headed doll is different, haunting, emotional, impacting me with the visual images and worse, I want to read more, and there is no more.

Well, oops on my entry! That's supposed to be "two-year-old" son, not "two-month-old." I thought I proofread it so carefully! Aargh...

Dean, I fixed it. Such a good little story!
These all have such a haunting quality--they start my imagination working and I want to go further into the stories. Love them!

Oh my gosh! These are all beautiful and very different. Loved reading where the photograph took each other--and absolutely fell in love with each story! What a neat exercise!

Thanks, Ellis. I enjoyed it!

I enjoyed this as well. I often did similar exercises with my students when I taught creative writing at both the high school and university. Interesting that we each responded in a different manner: nonfiction article, short story and poetry.

I loved these stories--each so unique and well done. Jacqueline posted the link to this blog on a writer's forum and I'm glad she did. I'll be checking back for more First Friday Posts!

Three unique interpretations, all wonderful, proving again the limitless bounds of the imagination. Love this feature.

Loved all of these. What different takes. This is a wonderful exercise, Ellis, and you always choose the most intriguing photos. First Friday can't come fast enough.

Wow. Fantastic roundup. The first two were like short films, and I love Jacquie's poem. That photo is cer-eepy.

Great job! Isn't it funny how three authors can write so differently?

Another fun Friday picture time! I loved all of them--thanks!

Thanks for fixing my goof, Ellis! It was fun to see what Joyce and Jacquie made of the picture, too. Always fascinating, the way a writer's mind works. :-)

These were wonderful pieces--all three. And what a photo. Kudos to all.

Loved these, each so creative and each so different. The reason authors should never worry about someone stealing their ideas. We're all different!

I love First Fridays and the great snaps you find, Ellis. These were fun to read and the different interpretations always remind me how we writers see things so differently.

I can see how this would be fun to do. It was certainly fun to read three such inspired responses.

Very well done! Several years ago, 19 authors who wrote short stories for Amazon Shorts wrote an anthology with each story inspired by the cover - a window overlooking a courtyard. The variety of stories was amazing!
http://www.amazon.com/WORLD-OUTSIDE-WINDOW-ebook/dp/B001QOGQUM/ref=ntt_at_ep_dpi_1

What a terrific post. And it's so fascinating the completely different versions each author came up with. Beautiful poem, Jacquie.

The photo reminded me that I still have Barbie's head in a box somewhere. My mother threw away the body not realizing the value an orignal Barbie would bring some day. Who knew?

Wow, great stuff. An evocative photo and three unique responses. And thanks for the inspiration--I wrote a quick piece, too.

Nikki, why don't you post it in a comment? They're such fun to read, it would be nice to see another one.