What's the difference between foretelling and foreshadowing?

Foretelling is when the author jumps ahead of the story with a “had I but known” statement or scene, though maybe not in those exact words. It's generally the prerogative of witches, discouraged as a plot device. It's a kind nana-nana-nanha (my creative spelling there), an obvious tease.  Foretelling takes away the element of surprise and deprives the reader of experiencing the events with the character.
Had I but known what lurked under the eaves, I would not have gone to the attic. And then the story begins but avoids telling what was under the eaves. This is supposed to build suspense, but most of us find it annoying. It takes away the reader's pleasure in figuring out the plot and trying to outwit the character.
In a movie, it would be letting the viewer see the killer in the shadows as the victim walks innocently down the dark street. The audience may anticipate but would be deprived of the big gasp and adrenaline rush when the killer jumps out wielding the axe.
Sometimes the author tells the reader the outcome—if Bob had known he'd end up locked in a cell, he wouldn’t have gone out that day—so the reader doesn’t feel the tension build along with Bob. Instead he waits for Bob to catch up. He knows what’s going to happen, so there’s little suspense.
If the same scene were done with foreshadowing, the camera would make sure the viewer saw the deep shadows but stop there, letting the audience figure it out. The tension is much greater that way. Foreshadowing is done with small portents of evil or small incidents that hint to the reader that worse is coming. In foreshadowing, the sky darkens, the wind rises, and the swells deepen. Tension develops as circumstances worsen. The timbers creak, a sail rips in a gust, and a barrel washes overboard, but the reader experiences it through the character, sharing his or her feelings. When this is done well, the reader’s heart races, his breath comes faster, and he turns the pages faster and faster. 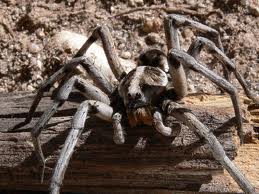 Another way to foreshadow is with a small incident that shows something about the character, say an excessive reaction to a spider. Though nothing more is told at this point, the reader knows Corey is terrified of spiders. But the seed has been planted. Now the reader will be watching for spiders, sure something bad is going to happen. Then let the reader forget, lull him into complaisance. Then, when things slow down, have the giant spider spring from the tree and grab the hero (gasp), or depending on the genre, drop silently onto the hero's shoulder (scream "look out").
Do you use either of these? Can you give an example?
Posted by Ellis Vidler at 10:00 PM

Hmmm...interesting. I have to admit I wasn't sure about the definition for the first, so thank you. I never do that because I don't write in omniscient POV. Foreshadowing, though--sometimes I think *all* my writing is foreshadowing :) Thanks for the post!

Jenny, I started my first book with "If she had known what it held, she'd never have touched it the first time." I did go on to explain right away, but it may still be a bad idea. Oh, well. Live and learn. :-)

Excellent explanation of the difference between foretelling and foreshadowing. Modern writers do a lot less of foretelling than did Victorian counterparts. Our style of writing is more to the point.
In THE TRUTH SLEUTH, I use foreshadowing in the very first chapter as Kim Reynolds feels a sense of wrongness only to discover the body of a teenage boy at a motorcyle rally.

Excellent post, as always, Ellis. I've never used foretelling because I've always found it contrived, and it does give away part of what's going to happen. True Grit, the movie, (never read the book) starts off in Mattie's voice 25 years after the main story. You know she lives, which took away the tenseness at the end when Rooster is racing to save her. As a pantser who knows where she's going, um, most of the time, I foreshadow sometimes without knowing I'm doing it. Maybe the technique is built in.

Except for that sentence, which I'm still not sure about (it's kind of marginal to me), I've never used foretelling either. I do like foreshadowing like the spider thing.

Jacqueline, I find that sense of wrongness adds to the tension. I've felt it too, just before things went haywire.

Excellent post! Once my editor insisted I change the murderer to another character and I had to go back and stick in all sorts of foreshadowing . . . kind of a fun exercise, really.

Vicki, your editor is good! I think you talked about that book--wasn't it The Day of Small Things? Beautiful writing.