This is a very long post today, but flashbacks are tricky. They're also controversial. Many people dislike them. My vote is for moderation (in all things). Flashbacks should be used sparingly and limited to past events that have a direct impact on the main story. Nice little scenes that show some characteristic or pleasant interlude do not make compelling flashbacks.
Once in a while the whole story is told in flashback (Isaak Dinesen’s Out of Africa, for example). Sometimes a murder mystery begins with the discovery of a body, and the story flashes back to reveal the history and events leading to the murder.
Transitions into and out of flashbacks require particular care. A flashback is when the story shifts to a scene in the past, a time before the time of the main storyline. It’s not told to the reader or remembered (that’s backstory) but shown as if it’s happening now. If your story is written in past tense, as most fiction is, then the flashback will be in past tense. Use the same tense as the main story, whatever it is. The reader should see the action in the flashback just as she does in the main storyline.
Here's an example. Sarah’s memory of the scene burned into her brain provides the transition into the flashback. Use had only enough to let the reader know the scene took place in the past. Had takes away the immediacy of the scene. Remember, flashbacks have action and dialogue. Show, don’t tell. 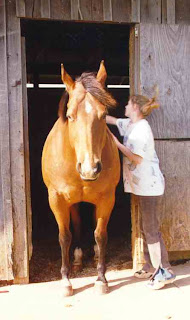 That June afternoon was burned into her memory--she envisioned it like a brand, a smoldering scar in the gray matter that was her brain. She had returned home from the day before, free of the and its straight-laced  headmistress forever. She wakened at dawn, brimming with joy, and tugged on some old pants and a tee shirt.  (She wakened is past tense, just like the main story line. Only one “had” is used to lead in to the flashback. After that, use the tense of the main storyline.)
Tugged was the word, all right; she must have put on more than a few pounds this last year. Taking care not to disturb her grandmother, Sarah signaled Trouble, the large hound dancing at her side, to silence. Together they slipped from the house and ran to the rickety barn to get Atticus. The horse whickered softly, bumping her with his nose as she lifted the bar that closed off his crude stall.  (For the reader, this is happening now. We experience it with Sarah, making it immediate.)
After a flashback, there must be a clear transition back to the present. This is essential. There should be no doubt. It must be clear that we’re back to now, the main storyline. Here’s the return transition from the same story. During the flashback, Sarah's arm is cut badly. To bring it back to the present, where she’s sitting in a car watching the snow fall (and has time to remember), I did this.
Sarah felt through her thick sweater for the scar on her right forearm. Harry Lucas had left shortly after that, and she never saw him again. (Note the single use of “had.” Harry Lucas had left shortly after that. That’s enough. The reader is reminded it happened in the past. Then you can go to past tense, or whatever tense your story is in.) From here, continue with the main storyline.
This was a long scene, one I felt was important, so I made it a separate chapter. The flashback occurred while Sarah is waiting for something, so she had time to remember without interrupting any action. It could have been a prologue, but I try to avoid them. I think it works better as a second chapter, with the first an action scene that raises questions and problems for the main character.

So, what do you think about flashbacks? This is how I see them, but if you disagree, speak up!
Posted by Ellis Vidler at 10:24 PM

Ramona, I hope it makes sense. Some days I wonder what I'm doing with these posts on writing.

It makes perfect sense, and your explanation is entirely spot on, Ellis. It's a good thing you are writing these blogs on writing. I can't think of any better way for anyone to learn than from an experienced and articulate writer like yourself. This is a wonderful blog, one of my favorites.

Beth, you have the best piece on writing a synopsis I've ever seen. AS much as I hate them, I at least get through them using your workshop article. I hope will all of us trying to give something we do have some value.

Great post, Ellis. I've just written a story with another story written in flashbacks. Now I don't think I want to reread it. And don't stop writing these posts. They're always valuable.

A story within a story can be handled several ways. I think what matters is that the reader knows which story he's in. Clarity. I don't know how you're doing it, but I'm sure it will be good.

And if I'd read my own comments, they might come out better--that "will" above should be "with," but it's still not a good sentence. Bah!