The Past Has Long Arms 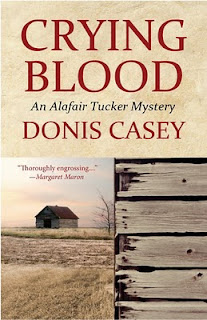 I’m amused at how some people seem to think that whatever is going on this minute is unique in human history. Hardly! Even our modern technology is just a detail. People never change. They are us! They just didn’t have cell phones. That’s why I write a historical mystery series. As William Faulkner said, “The past isn’t dead. The past isn’t even past.”
My sleuth, Alafair Tucker, lives with her husband Shaw and their ten children on a prosperous farm outside of , in the 1910s. She never sets out to solve murders, but all those pesky kids keep getting themselves into trouble, and need their mother to get them out. Fortunately for me, Alafair is the kind of woman who will do anything, legal or not, for her kids. Alafair is an homage to my foremothers, tough as nails and just as loving, who did whatever needed to be done, whether they were supposed to or not.
Crying Blood is the fifth installment in my Alafair Tucker series. Alafair figures large in the story, but this time the mystery revolves around her husband, Shaw.
It’s the fall of 1915, and Shaw, his brother James, and their sons are on their annual quail-hunting trip, when his dog turns up a shallow grave and evidence of a long ago dastardly deed. Shaw finds himself faced with what seems to be the very real ghost of a murdered Indian who is looking for justice, or as the Muskogee Creeks say, “he’s Crying Blood.” 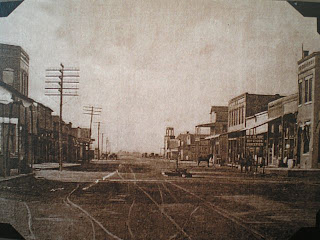 As Shaw discovers, the past has long arms.
I live in , 1200 miles away from Boynton. Both of my parents were raised in Boynton, and I spent a lot of time there in my childhood. My grandmother owned Mrs. Casey’s Cafe on the main street for over fifty years.
Boynton was quite the thriving community back in Alafair’s time. It had two banks, five churches, a newspaper, a brick plant, an oil refinery, four general stores, two hardware houses, a furniture store, a farm implement store, and a big cotton gin. The 1916 Directory of Boynton states, “Altogether Boynton is one of the most progressive cities in the state, and its future is full of brilliant promise.”
It didn’t quite turn out that way. The Great Depression did it in, like it did so many farming communities. When I write about the Boynton that Alafair Tucker and her family inhabit, I might as well be writing about Atlantis – a place that only exists now in the racial memory of its descendants. And yet I am who I am because of it.
Read the first chapter of each novel on my website, www.doniscasey.com, I blog about writing at www.typem4murder.blogspot.com, and about food in mysteries at http://www.fatalfoodies.blogspot.com/. 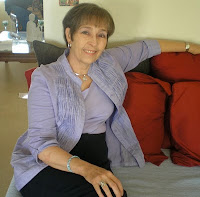 Donis Casey is the author of five Alafair Tucker Mysteries,The Old Buzzard Had It Coming, Hornswoggled, The Drop Edge of Yonder, The Sky Took Him, and Crying Blood. Donis lives in , with her husband, poet Donald Koozer.
Donis will send a signed copy of the original ARC to a name drawn at random from all who comment. This offer ends on Friday, March 4. But you must leave your email address for me to contact you. Write it this way--ellis at ellisvidler dot com--to defeat the trolls.
Posted by Ellis Vidler at 5:30 AM

Nice post Donis. I believe we are all parts of our history, whether we know it or not. I wish I knew more about mine, but that was long ago and far away.

Would love to read your book. I have Oklahoma family roots (don't live too far away now) and of Native American descent. If I am chosen you can contact me
Allene - glenorallene@yahoo.com

Nice post, Donis. You've hit on a great to keep your family history alive. Love the Faulkner quote. He's a favorite of mine too.

Oh my gosh, I love the concept the Alafair Tucker mysteries. Please enter me in the ARC drawing, but know that I plan to download these books! Ellis, well done!

I can't wait to read it either. I read the excerpt at http://www.doniscasey.com/?page_id=229
I should have posted it. It will make you want to read it.
Allene, I'm glad you included your email. It does sound good, doesn't it?

Donis, So true about history. It's a fascinating subject that steps right into today easily, especially those who lived it. I've read some of your books, lastly The Sky Took Him. Good stuff and I like the Oklahoma setting, not far from where I live.

I'm posting this for Zulema, who wrote to me when she had problems entering her comment. I'm sorry. I don't know what happened.

I clicked on Messages and got a dialog box in Spanish. I entered everything and my comment, but then it said my comment went to the second e-mail address I had to put in. Should I repeat my comment here?

It was about both my daughter in Japan and me in the Bronx adoring Alafair and about being very sorry that Boynton as it was no longer exists. Oh, and that she is a terrific writer.

Darn. Another one. I don't know what's wrong, but here's the intended post.

BJ King Says:
March 1st, 2011 at 11:03 pm e
I read your post on Ellis Vidler’s blog. I’m looking Forward to reading your books set in early 1900s. My husband was born and raised in Binger ok. His family still live there ane we go out once at the least once a year. And if the world couldn’t get any smaller, I have a cousin who retired last year from the Tempe Museum. Tried to post on Ellis’s blog and it failed. thanks.

I'm so happy for your continued success with your series! Excellent books. Would you like to be a guest on my blog soon?
Heidi
heidi at heidi m thomas dot com

I've been reading all your wonderful comments with great pleasure - so nice to hear from you all! And yes, Heidi, I'll be in touch.

Oh how I love your Alafair Tucker series! I discovered your books about 6 months ago and have read every one. I love being transported back in time with your books. As a mom with elementary aged kids, it was a fantastic escape that I needed each day! I can't wait to read the latest in this series.

I can't wait to discover your series, Donis. It sounds wonderful. I would hope to be a mother like that--sans the extra eight, and the well, murders, of course ;)

But seriously, I think now is a point in time where we are beginning to realize some of what we left behind or discarded too quickly. It's the perfect time for your work.

I have read the first book in the series. Enjoyed it immensely. Up until that point I had always stayed away from historicals..just never read them. I plan on staying with the series for as many as you write.

I've been reading good comments about your books various places online. Look forward to checking out your series!

Love your series. Always good to see an original take, and have recommended it to others.

As a mystery reader and writer,
I love learning more about other writers. Makes me feel connected.

Entries for the drawing are now closed, though of course you can still leave comments. I'll post the winner shortly. :-)

Donis, I'm delighted that you stopped by. I enjoyed reading about Boynton and I'm really looking forward to reading your book.

And thanks to everyone who commented. Shirley, you won the book. Congratulations. Y'all come back now, you hear?